First of all, thank you for your patience as these weekly newsletters went on unexpected hiatus. Normally I set aside Friday mornings for writing these, but I've had a string of frantic Fridays either professionally or personally that left me with a number of half-written and unsent email newsletters. But we're back -- finally!

The big news in the past few days is the MBTA coming back with a very different Revised Bus Network Map. I'm still examining this updated proposal, but my initial reaction is that seems like a best-of-both-worlds situation where service is increased while many of the favorite routes (like the 87, 89, and 95) targeted for re-routing or elimination by the initial draft now are being kept. While the earlier proposal prioritized moving riders into and out of Boston at the expense of intra-city travel, that appears to have been rectified in this revised proposal. 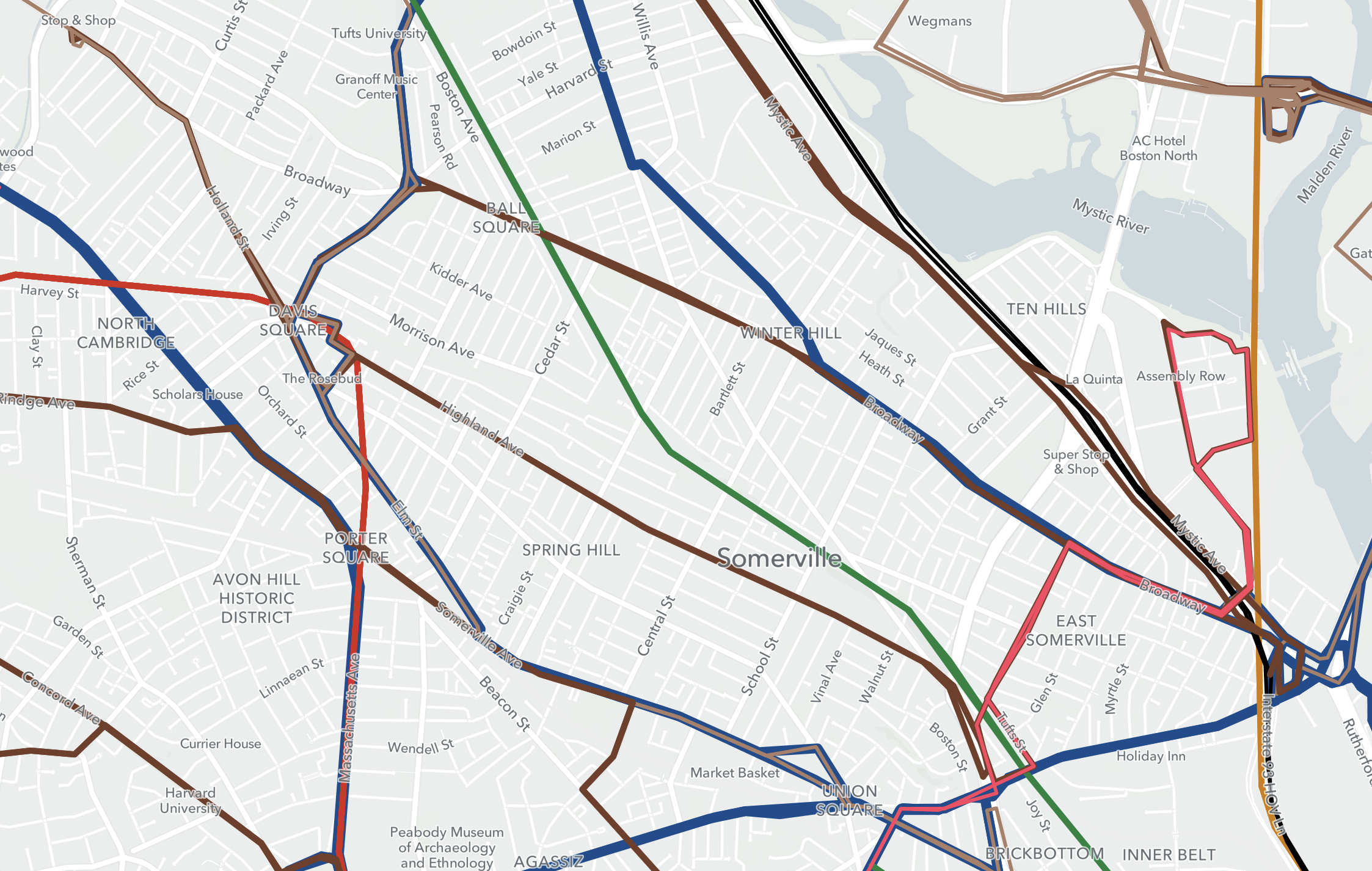 I want to give a massive thank-you to everyone who took the time to organize the community and to give feedback on the initial proposal -- from residents to colleagues to City staff to the Mayor. Of the roughly 20,000 comments submitted on the first draft of the proposal, approximately 25 percent of those were from Somerville alone! It's clear the MBTA listened to us, and I really appreciate that.

I'll note that I do wish the MBTA had introduced bus service onto Route 16 as part of this proposal. Bus lanes on Route 16 would've served as a de facto road diet and would provide some badly-needed traffic calming there. And I still wish there were more north-south routes connecting with the Green Line Extension in general. But this is a massive improvement from the first draft and I want to celebrate those wins.

Please note that the job is not done. There are two important meetings about this revised bus proposal this week:

Please show up to these meetings, thank the MBTA to listening to the community and its ridership, and urge them to continue to so!

Here are some other key things happening in the city: 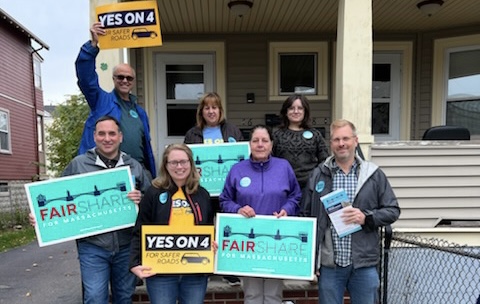 In other words: YES ON ALL FOUR BALLOT QUESTIONS.

Water and Sewer billing issue
If you're seeing a wildly inflated water and sewer bill for the most recent billing period, this might be due to a technical glitch in the switchover to new hardware and software. A number of us on the City Council have been hearing from constituents about this, and Ward 4 Councilor Jesse Clingan and I submitted council orders asking for an update on this problem and for a report of year-on-year billing data at the October 13 City Council meeting.

The Water and Sewer Department has acknowledged the issue and is asking those who feel this might be the case with their account to e-mail [email protected] with your account number, address, a description of the potential error, a copy of your bill, and a photo of the water meter showing the reading (and if possible, the serial number). Relatedly, please consider signing up for the free AquaHawk service to get warnings about aberrant water usage and potential bill spikes.

Holland Street redesign
Following the tragic death of cyclist Steve Conley on nearby Broadway in August, the Administration and the Mobility division moved quickly to add protected bike lanes to the Holland Street redesign in progress. This news was applauded by cycling safety advocates and met with concern by some members of the community, including seniors and business owners in that area because of the net loss of 51 on-street parking spots. (Note: This doesn't factor in newly-granted access to off-street metered parking at the Tufts Administration Building on Holland Street.)

A somewhat similar project earlier this year on Mass Ave a few blocks away in Cambridge drew protests from some business owners, who were threatening with boycotts by street safety advocates. I made the case at the time that boycotts would be counterproductive, as business owners are likely to attribute any loss of revenue from a boycott to the impact of reduced parking inventory. Instead, I urged street safety advocates to patronize these businesses and make it known that they had walked, biked, or taken public transit there -- with a goal of giving business owners a more accurate picture of their customers' transit modes. I'd urge everyone to take a similar approach here.

City Hall Community Meetings
I've been able to attend five of this fall's City Hall Community Meetings (formerly ResiStat) meetings throughout the city. I want to thank the Mayor, City staff, and my colleagues on the council for their work on these. It's been invaluable for me to hear directly from residents and business owners about their concerns and hopes for their city.

I was unable to attend the Ward 5 and Ward 2 meetings, but I did go back and watch the video recordings of those. The presentations and video recordings are archived at the link above if you'd like to go back and look at those. The Ward 6 meeting is the final one, and that's scheduled for Thursday, November 3, at 6 PM at the Somerville Community Baptist Church (31 College Avenue). If you're a Ward 6 resident, I hope to see you there!

Household Hazardous Waste Drop-off Service returns!
Thank you to the Ward 5 constituents who spoke out at their City Hall Community Meeting earlier this month about their inability to get rid of hazardous waste due to the City currently lacking a contractor to handle these items. I submitted a City Council order on October 13 to get an update on the situation.

I'm happy to report that City staff have found a way to offer drop-off service for hazardous waste. With the exception of Thanksgiving Day (November 24), residents can bring household hazardous waste to the DPW yard on Franey Road on Thursdays in November and December from 4 to 7:30 PM.

MBTA Closures & Slow Zones
The re-opening of both the Orange and Green lines last month was met with relief after nearly a month offline for both. Orange Line riders are experiencing continued slow speeds and long commute times as slow zones persist. (Now the Red Line is having its own slow zone issues.) The situation began improving last week, but it's frustrating to continue running into this problem after the long closure was supposed to solve this. And I'm disappointed that we aren't hearing from the MBTA about plans and a firmer timetable for fixing this. 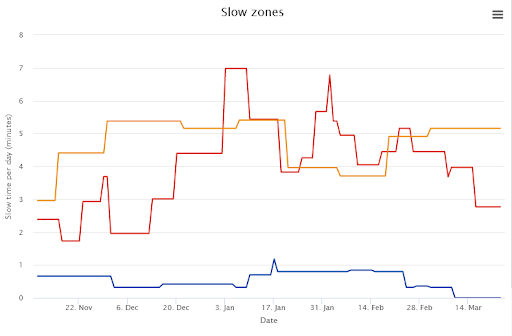 One group that will be feeling the impact of the four-week shutdown for a while is the small businesses in the area who depend on these lines to bring them customers. So please make sure to patronize our local businesses as they look to recover from that loss of revenue!

Spring Hill Sewer Separation Project community meeting
The work bringing the Spring Hill sewer into the 21st century is a massive one that has presented some major challenges for the neighborhood and those looking to move through the area. Join me on Wednesday, November 9, at 6 PM for a virtual community meeting hosted by Mayor Ballantyne and Ward 3 Councilor Ben Ewen-Campen.

Conducted via Zoom, the meeting will be an opportunity for residents and business owners to get an update on the project, as well as to engage with electeds and City staff to share feedback and ask questions.

The Moving Wall coming to Somerville
In 1990 I visited the Vietnam Veterans Memorial in DC with my father. We drove out from Iowa and it was an incredibly emotional experience for me as a 13-year old to witness his grief for friends lost in the war and the trauma he carried with him. My father has an image of The Wall hanging in his home to this day.

So I'm really pleased to see The Moving Wall coming to Somerville next month. This half-size, mobile version of The Wall will be at The Mass General Brigham Great Lawn at Assembly Square (399 Revolution Drive) from November 10 to 14. It will be viewable by the public 24 hours a day during that time. Volunteers are needed to staff the event, so please consider signing up for a four-hour shift here.

90 Washington Street
The Public Safety Building Project Building Committee had our first meeting since early summer back on October 5. The update we got was that our work is on hold while City staff are in "pens down" mode.

In the meantime, the Administration is looking to explore the other aspects of the proposed 90 Washington Street project involving private development, potentially of both residential and commercial space. I've maintained that site is crying out for good, high-density, transit-oriented, mixed-use development, so I'm enthused to see where this leads. Neighbors of 90 Washington should be on the lookout for news about how to get involved as members of a soon-to-be-created Community Advisory Committee for the area.

Get paid to study air quality in your home!
Researchers at Tufts University and UConn Health are conducting a Home Air Filtration for Traffic-Related Air Pollution (HAFTRAP) study to learn about whether installing an in-home air filter will lower exposure to air pollution. Researchers are looking for study participants who are at least 30 years of age, speak English or Spanish, and live full-time within 200 meters of Interstate 93 (colored in purple below). 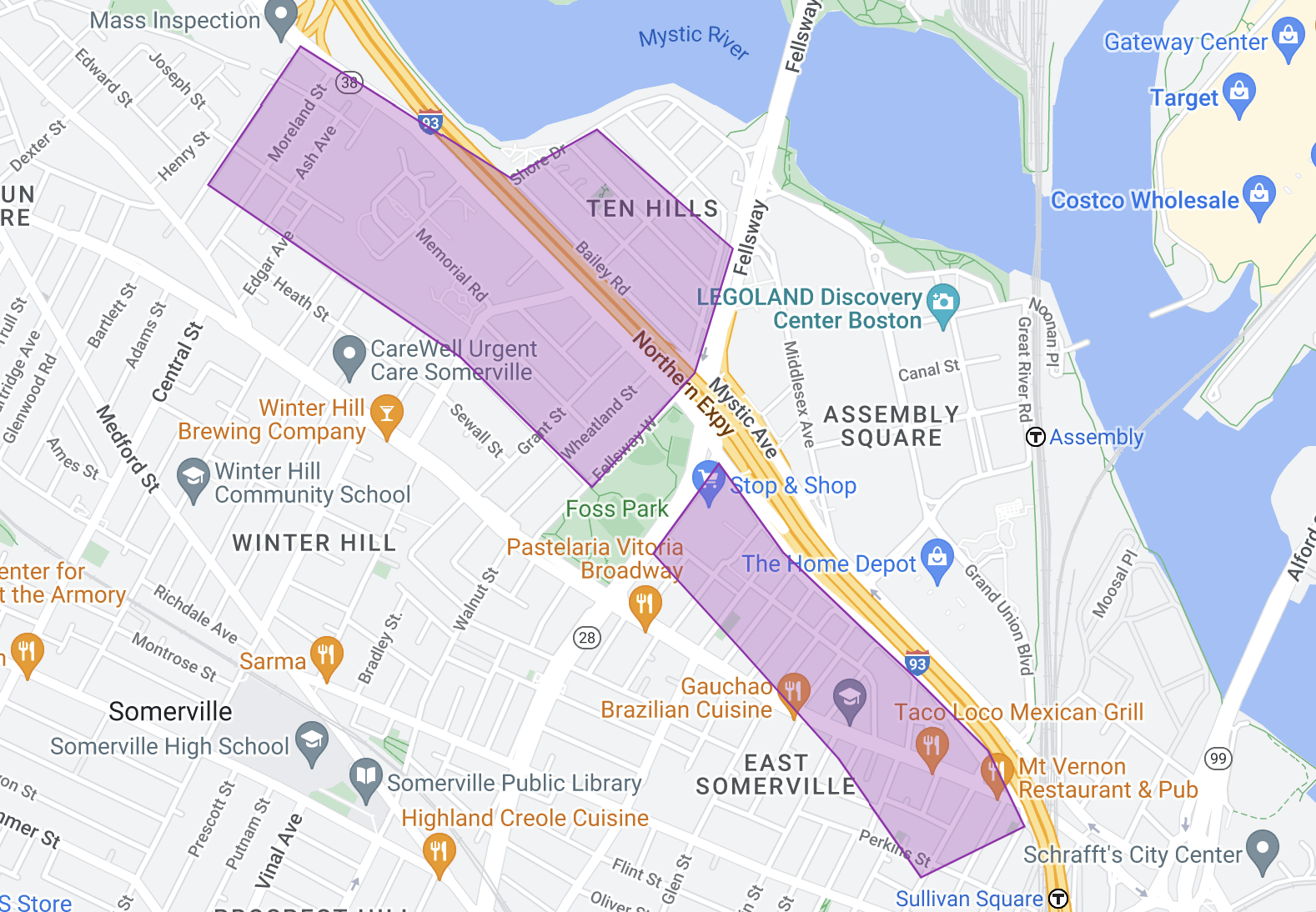 There is no cost to participate and participants will be paid as much as $300 in compensation. COVID safety procedures are in place. For more information, please call 860.571.1317 or email [email protected].

Crossing Guards needed!
The City still is looking for crossing guards with the school year now in its third month. Apply for those or any of the many other City of Somerville positions and Somerville Public Schools openings currently posted.

Get involved in your city
The following boards and commissions currently are seeking new members:

Did You Know...
You can stay up to date on City Council meetings and even look up the items submitted by councilors on the City Council's new Legistar platform. It's been a bit of an adjustment switching from the previous MinuteTraq software, but we're getting the hang of it.

Office Hours
I'm holding my weekly group office hours this Sunday at Lou Ann David Park (1060 Broadway) in West Somerville from 10 AM to noon. Come meet with me and your neighbors to talk about the issues impacting you or grill me about what's happening in the city! 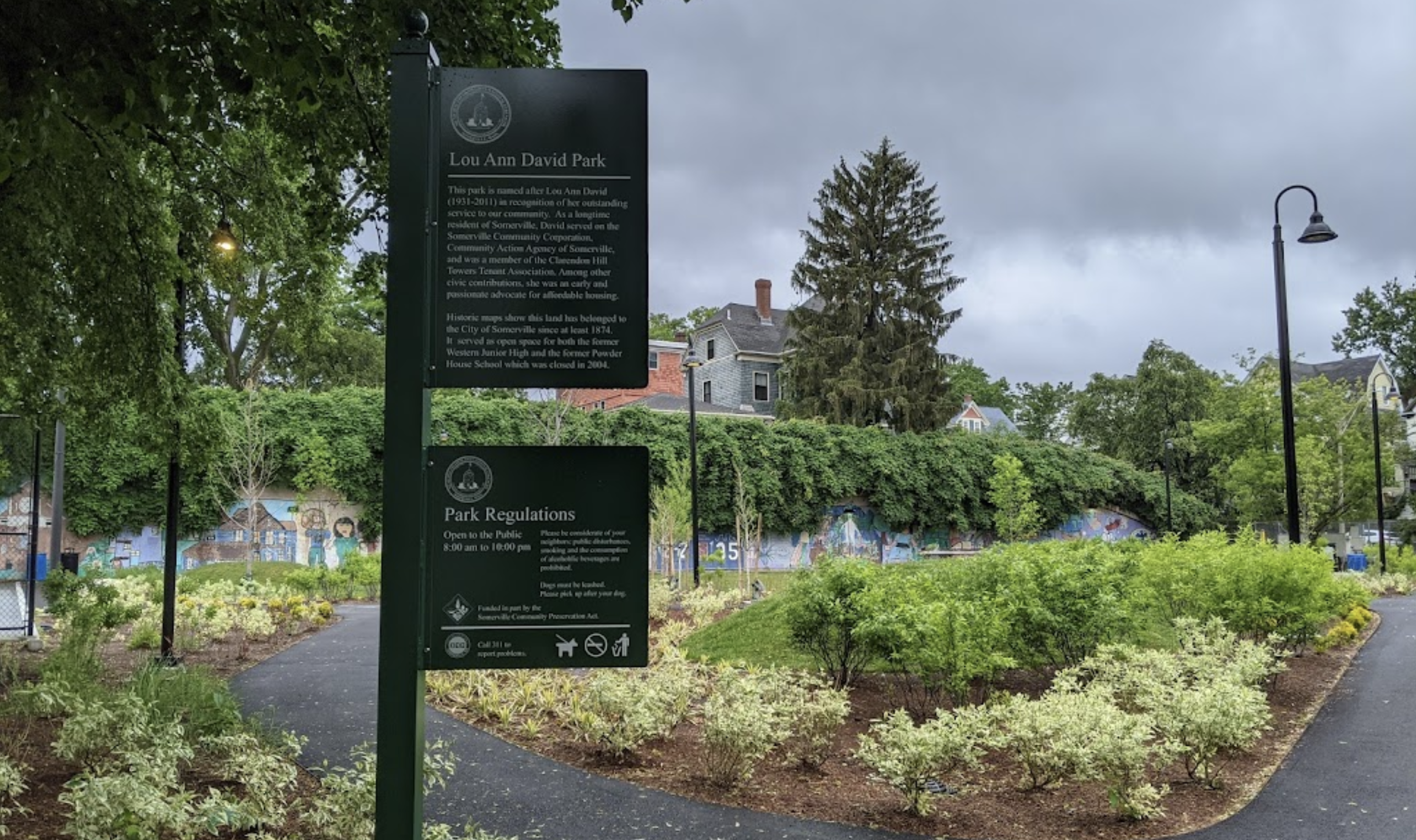 I'm also continuing to offer on-demand office hours at a date/time that's convenient to you via my Calendly.

The Week Ahead
Here's what I'll be attending this week: