Thursday's fire and evacuation of an Orange Line train on a bridge over the Mystic River at Assembly Square was the latest alarming safety and operational incident for the MBTA. I'm relieved that no one was killed or injured this time, and I want to thank the Somerville Fire Department's Marine Unit for their quick response. 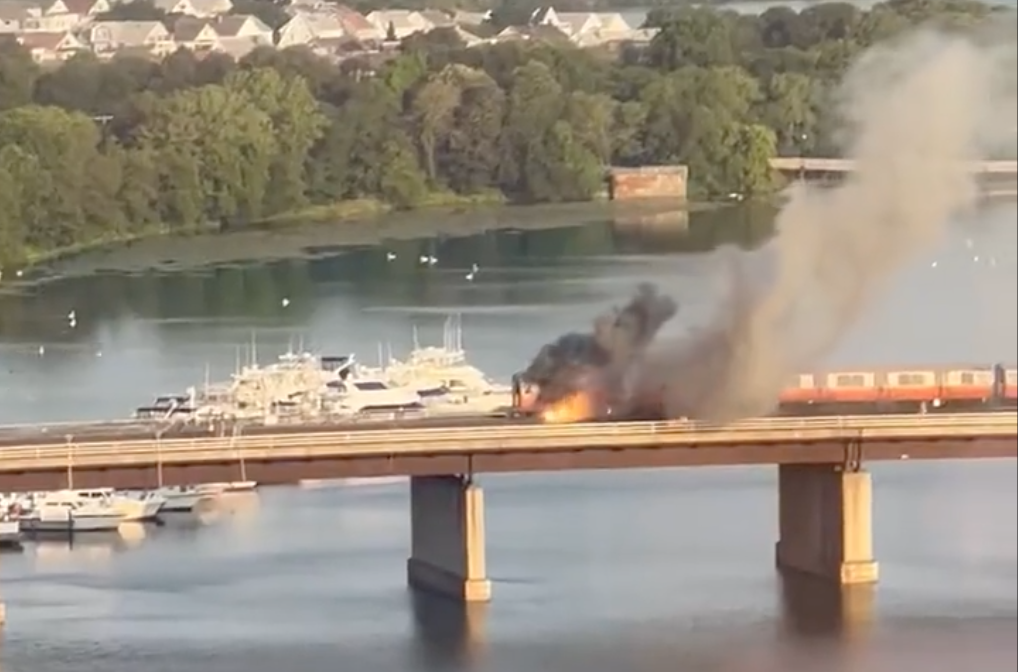 It's no accident that we're seeing more and more things going wrong with the T. Both our country and our commonwealth made a conscious decision decades ago to embrace austerity rather than invest in our aging infrastructure. This current reality is what they signed on for when they opted to prioritize tax breaks for the wealthy over spending on public interests like infrastructure and our social safety net.

I registered my disgust on social media on Thursday, and I was heartened to see a lot of agreement. It's absolutely ridiculous that we've chosen this path -- and that we continue to proceed with it at the federal and state levels. Blessed with an unexpected $3.6 billion budget surplus, our Massachusetts governor and legislature decided this month that mailing out $250 checks is a better use of funds than fixing our crumbling infrastructure. What a time to be alive.

But there's cause for hope. Massachusetts voters will have the opportunity to vote directly to change our current, stupid course of history on November 8. The Fair Share Amendment will be on the ballot, and this simple, straightforward measure is a great start as far as moving away from disastrous austerity in our commonwealth.

The Fair Share Amendment simply asks those Massachusetts residents fortunate enough to be making over $1 million in income each year to pay a measly additional 4 percent in state income tax on earnings over $1 million. It's an absolutely minimal ask of those who have benefitted more than anyone from our local economy made possible by infrastructure like our top-rated public education system and our transportation system. We should all be so lucky as to be asked to pay a little extra tax on earnings over $1 million.

Our public higher education costs are some of the highest in the nation, and our aging public transit system and roads and bridges are falling apart after decades of neglect. If the Fair Share Act passes, these new revenues would be specifically earmarked for additional spending on "quality public education and affordable public colleges and universities, and for the repair and maintenance of roads, bridges and public transportation."

A number of us on the Somerville City Council will be hosting events in support of the Fair Share Amendment in the months before Election Day. Please come join us and help canvass your neighbors. Yes, this amendment is expected to receive a lot of support here in Somerville, but this is a state-wide ballot measure and we want to run up the score in progressive areas to ensure passage of this vital constitutional amendment.

Here are some other things I'd like to put on your radar this week:

299 Broadway
One of the most common questions I get is "What's happening with the former Star Market site on Broadway?" It's been a long, frustrating process, but lately I've been happy to tell folks that there's real, definite movement afoot. I did a lengthy Twitter thread last week detailing the history of the site and where we're at now.

There's an urban renewal plan chugging along, meanwhile Mark Development has a parallel proposal in the works to build large amounts of housing -- including 141 affordable units -- as part of a mixed-use, transit-oriented development. The main sticking point right now seems to be their ask for a waiver of the parking regulations that make residents of their market-rate units ineligible for resident parking permits, given the site's location within a 0.5-mile transit walk shed. I'm looking into other, creative approaches to avoid setting what I see as a concerning precedent.

Remote meeting authorization extended
It went right down to the wire, but the legislature approved an extension of the authorization of remote meetings for local governments through March 31, 2023 -- and it was signed into law by the acting governor last Saturday. The previous authorization had expired on July 15, and it was important to see this continue. Even beyond this current pandemic it's crucial that we remove barriers to participation in our public meetings. So I'd like to see this authorization made permanent.

VOTES Act
At our July 14 City Council meeting, we were asked to take up an item authorizing the Chief of the Police Department to assign police officers to polling places. This is due to a provision in the new VOTES Act that gives these powers to bodies like our City Council.

Given the novelty of this legislation and the timing of the September 6 primary, the City Council voted to approve a similar item authorizing the Chief to assign police officers at the polls for the looming September 6 primary. This will buy us time to take up subsequent authorizations after the summer recess, so as to not rush into anything.

Tenant Information Ordinance Amendment
My At-Large colleague, Willie Burnley Jr., sponsored an amendment to the Housing Stability Notification Act, requiring that tenants be notified of their rights at the beginning of a lease. Previously, tenants received this information at the end of tenancy, or when eviction proceedings began. The council approved this back in the spring and it went into effect earlier this month.

I think this is a great idea and a welcome improvement. I want to thank Councilor Burnley and the Office of Housing Stability staff for all their work on this. The result is an improved ordinance and  a fantastic document absolutely full of important, helpful information for Somerville tenants.

College Ave & Holland St Mobility Improvements
This spring and summer have seen work commence on the mobility improvements for College Avenue and Holland Street in West Somerville. This project is designed to make these streets safer for drivers, cyclists, and pedestrians, and to improve public transit. I believe this work will make our city safer and I strongly support it. 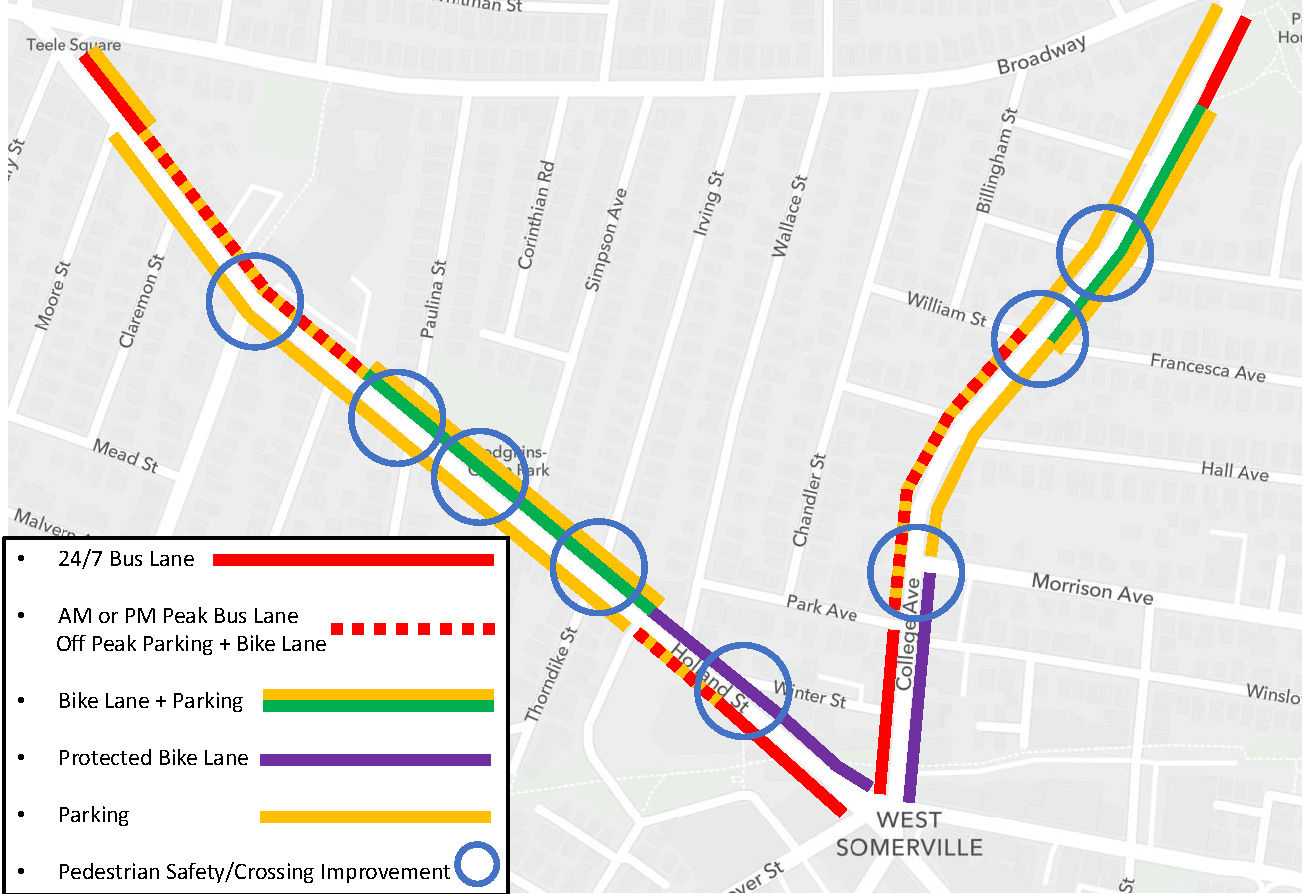 I've heard from a handful of constituents that the new, unmarked traffic calming components are surprising drivers and leading to vehicle damage and even potential collisions. These mobility projects tend to be logistically-complex ones with many moving parts, but I do agree that we need to get new traffic calming infrastructure made visible as quickly as possible once it's installed, for everyone's safety.

Be a poll worker this fall!
Our democracy requires fair, transparent, efficient voting to work. But elections don't run themselves. The City recently put out a call for polling place workers for the 2022 election cycle. If this sounds like something you'd be interested in doing, there are a pair of informational meetings on Thursday, July 18 at City Hall: an afternoon session from 2 to 3 PM and an evening one from 6 to 7 PM. You can register here to attend.

Bus Network Redesign Feedback
I've written several times previously about the important MBTA Bus Network Redesign process happening right now. The window for collecting feedback is closing at the end of the month. If you have yet to do so, please review the proposed changes and and share your comments with the MBTA! 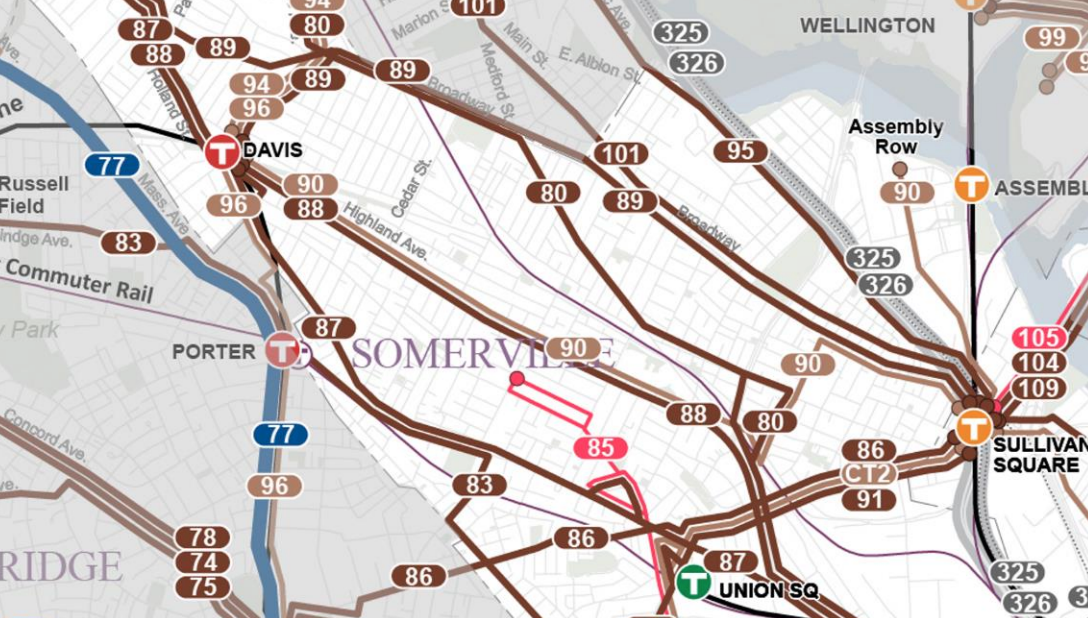 You can submit feedback using the MBTA's online form, as well as at two remaining public meetings:

Junction Park Community Meeting
The third community meeting for Junction Park is scheduled for Tuesday, July 26 at 6 PM. Come attend this virtual meeting to learn about the project and be a part of reimagining this great space along the Community Path and Green Line Extension, right in the heart of our city.

Did You Know...
A Privately-Owned Public Space, or POPS, is a place that is open to the public despite technically being owned by a private entity. While the City maintains a list of public spaces here that includes POPS, a number of us on the City Council are pushing for signage at these spaces and a map of POPS in our city, similar to what Boston does. 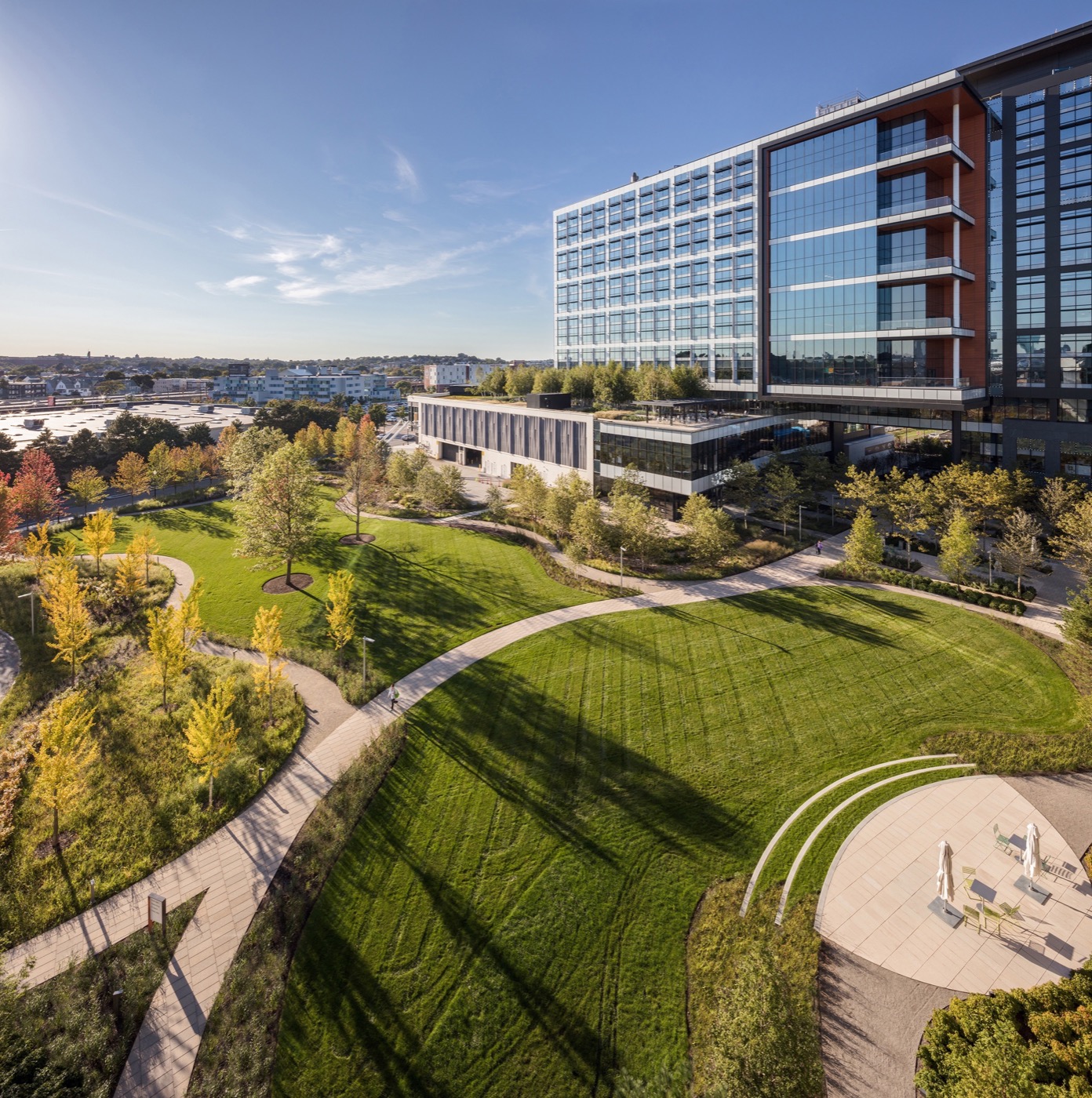 Office Hours
I'm taking a break from weekly group office hours during the summer recess, but I'll continue to offer on-demand office hours to fit your schedule. You always can book time with me via my Calendly to meet in person or virtually.

Fundraising Plea
These newsletters are part of my plan to engage with the public, with a goal of increasing awareness of what's happening in our city. The tools I'm using -- NationBuilder, Google Workspace, Linktree, Calendly, and Zoom -- all have subscription costs associated with them. So if you find these newsletters valuable, I'm asking for your financial support to help pay for these subscriptions. 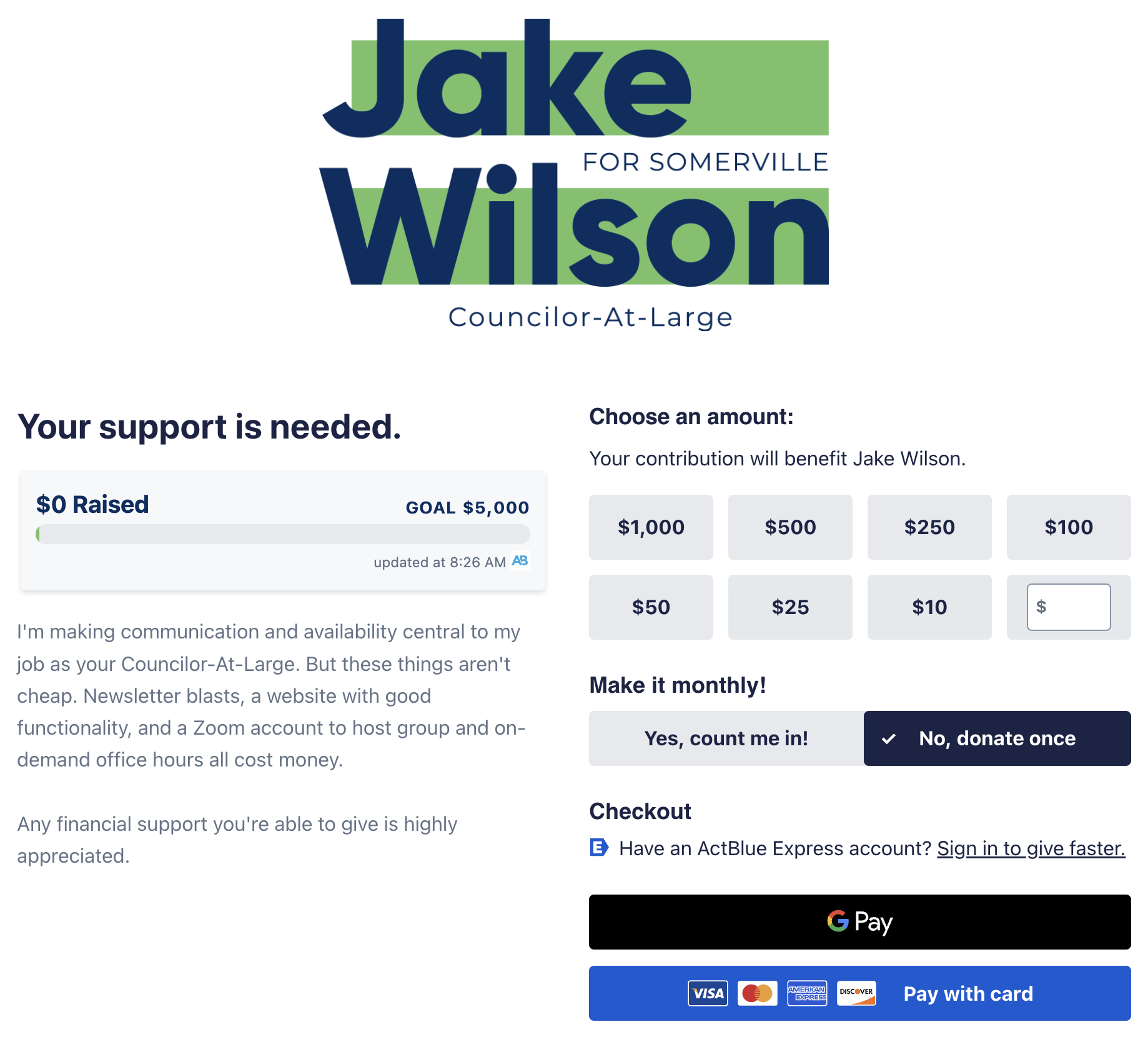 Click here to donate --  and thank you for your support!