This newsletter was going to be about the conclusion to Budget Season. Then Friday morning, the Supreme Court overturned Roe v. Wade. Now I can't imagine talking about anything else. We've known this disaster was coming for some time now -- specifically from that leaked draft opinion and in general from what's happened in our country over the past few decades. That didn't make it any less awful when the news broke on Friday.

I spent the day resisting the urge to go off on social media and trying to salvage my 11-year old daughter's birthday. While they -- for now at least -- will continue to have autonomy over their body here in Massachusetts, I thought of the other 11-year olds in less fortunate states and what this means for their futures. For nearly 50 years, Americans have known that they won't be forced to give birth if they were to become pregnant. It's the only reality multiple generations of us have known, and now it's suddenly gone in nearly half of the US. And that's utterly terrifying.

As a city councilor, I tend to be hyperfocused on issues and policy at the municipal level. It's my job and it's also a form of self-care for my mental health after becoming increasingly upset and despondent about the national political scene in the past decade. But even with a national issue like reproductive rights, there are things we can do at the local level. Earlier this month the Somerville City Council prepared for this SCOTUS malfeasance by passing an ordinance securing the rights of individuals seeking reproductive healthcare locally. This ordinance prevents City of Somerville staff (including police) from cooperating with other jurisdictions seeking information on these matters.

This is a frightening moment in American history where norms are being shredded and suddenly everything seems to be up for debate. Even rights that have been around for nearly 50 years are in the GOP's crosshairs. We're seeing a scarily successful assault by an unhinged Republican Party on the very idea that we should have consistent rights across our nation -- unless of course the right in question involves guns. It's increasingly difficult to see a path forward for this country, as this feels very much like the beginning of the end for our republic. I'm honestly not sure where we go from here, when one party in our two-party government is intent on blowing up the American experiment and the other party can't get its act together and would rather fundraise over issues than act to fix them.

On a less depressing note, here are some other things I'd like to put on your radar this week:

Putting a bow on Budget Season
On Thursday night the City Council approved the FY 2023 budget to conclude an intensive three-week budget review process. This was my first Budget Season and I also was tasked with leading this process as chair of the Finance Committee. I learned an incredible amount and I want to thank everyone who helped a newcomer navigate it all: Vice-Chair J.T. Scott and my colleagues on the Finance Committee, Directors Ed Bean (Auditing) and Mike Mastrobuoni (Budget), the clerks, and all the city staff who patiently answered all our many questions.

All 11 of us on the council undoubtedly would've made different choices with the budget if it were up to us, but that's always the reality. When the proposed budget was unveiled back on June 1, I immediately identified things I liked about it and things I wasn't so wild about. Some of the cuts we as a City Council made addressed areas of concern. And I was happy with some of the reallocations that the Administration made in the quick turnaround on Thursday morning. But I was particularly disappointed to see a City Council shared budget priority of funding for an alternative emergency response program left out. We'll be looking to make sure that and other priorities get funded by the Administration in the coming months.

Weigh in on Charter Review
Scarcely a City Council meeting goes by now without a call-out to #charterreform. For those unfamiliar with the term, our city charter is the vital document that defines how our government functions. For the past 18 months, the Charter Review Committee has been hard at work determining what our new charter should look like, and they're ready to share some of their key recommendations with the public. 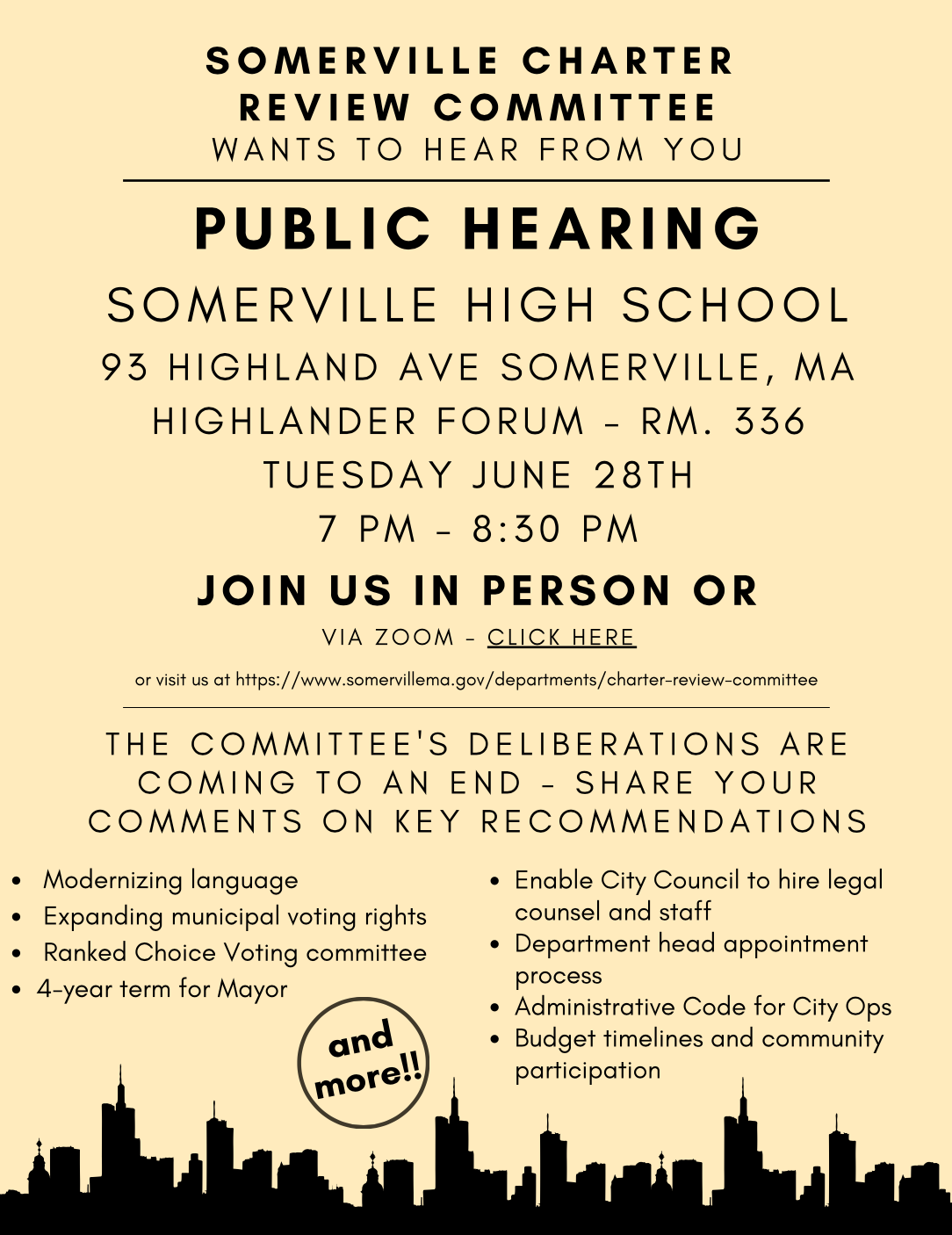 While the Charter Review Committee's deliberations on a new charter are wrapping up, the public has a chance to give their input on some major aspects of that work at a public hearing on Tuesday, June 28. You can attend in person in the beautiful new Highland Forum space (Room 336) or virtually via Zoom. I urge everyone to attend this.

Parking: Just the facts
The Citywide Parking & Curb-Use Study has sought to get good, actionable data on how we're using our curb areas and our street parking supply and demand situation. This information is critical as we look to make important decisions impacting mobility and street parking as a city, so it's so essential that we get this part right. 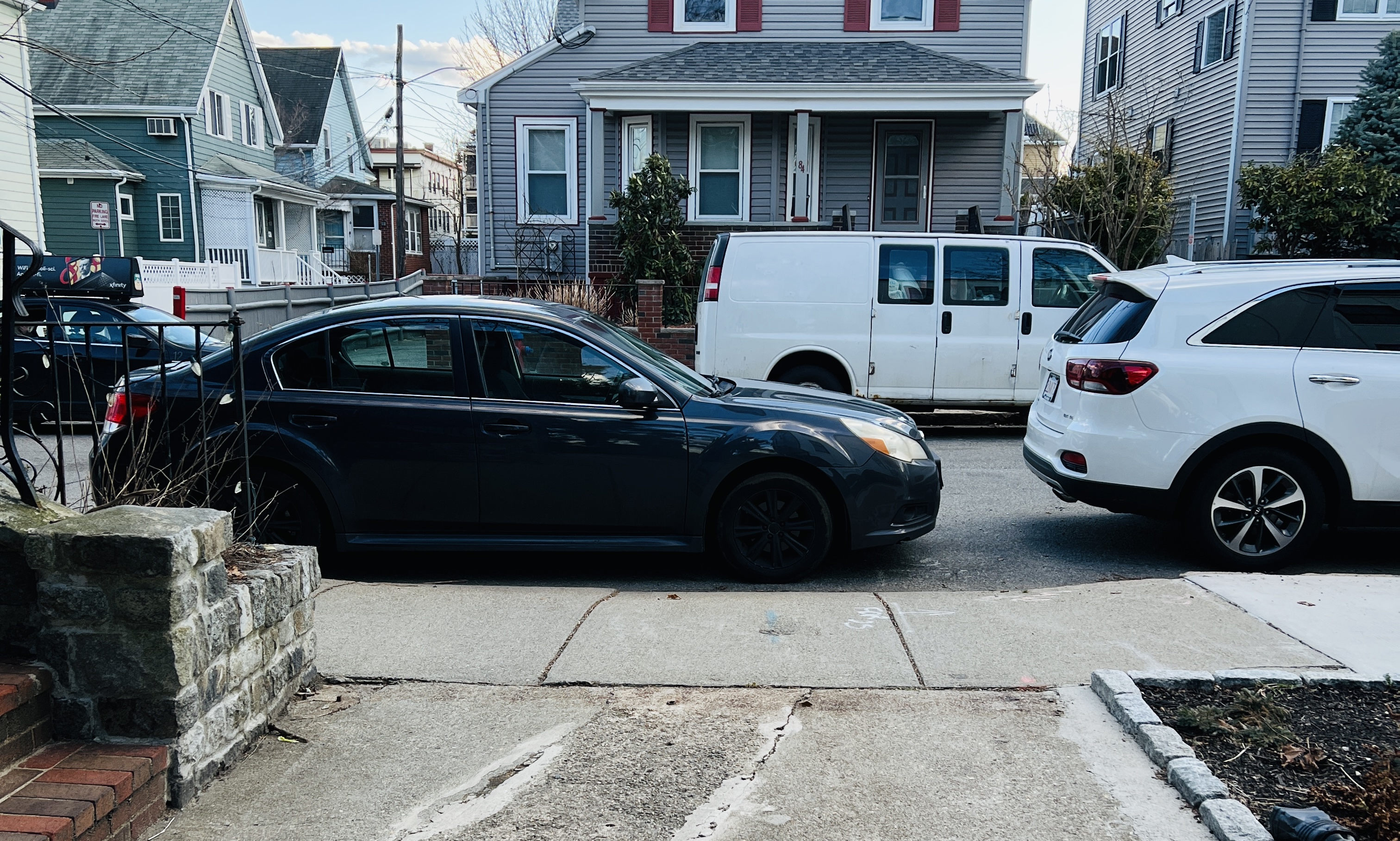 City staff will be hosting two virtual meetings this week to go over the information and key findings from this study, possible recommendations that will come out of it, and to collect public feedback on this process. You can attend either Monday, June 27 (6 to 7:30 PM) or Wednesday, June 29 (noon to 1:30 PM).

Former Somerville alderman arrested
I've had a number of folks ask me about the FBI's arrest on Friday of local attorney and former Ward 5 alderman Sean O'Donovan on federal charges stemming from allegations of attempted bribery of the Medford police chief. This is an extremely sad development and the charges are gravely concerning. But I also want to stress the importance of due process here -- and the presumption of innocence in our legal system.

Having said that, given Mr. O'Donovan's involvement in Somerville politics, development, and (especially) host community agreements, I do believe this would be a good moment to take a close look to ensure nothing similar has happened with host community agreements in our city. Coincidentally, there is a neighborhood meeting scheduled for Wednesday, June 29, at 6 PM regarding a proposed cannabis retail store Mr. Donovan and his family are involved with at 620 Broadway.

Make your voice heard on 90 Washington
One of the biggest questions before our city right now is what to do with 90 Washington Street. The city took this land by eminent domain using a demonstration project plan. We know that we're bound by the terms of that demonstration project plan that say, "[e]ither a portion of the Project parcel may be subdivided to allow the construction of a 'standalone' multi-story public safety complex or the public safety uses can be incorporated in a larger mixed-use building on the site." But having those options does leave us considerable wiggle room in terms of what we actually build on the site.

After previously pushing the standalone public safety building option, the Administration announced last month that they're hitting the pause button to listen to community feedback on the plan. As a result, there are two listening sessions scheduled for this week: in person on Tuesday, June 28 (6 PM) at East Somerville Community School (either in the auditorium or under a tent in the basketball courts in front of the school) and virtually on Wednesday, June 29, (6 PM) via Zoom.

Draft of bike network
This past Thursday, while the City Council was approving the FY 2023 budget, there was another important meeting happening. In this virtual meeting, a draft of the highly-anticipated bicycle network map was shown: 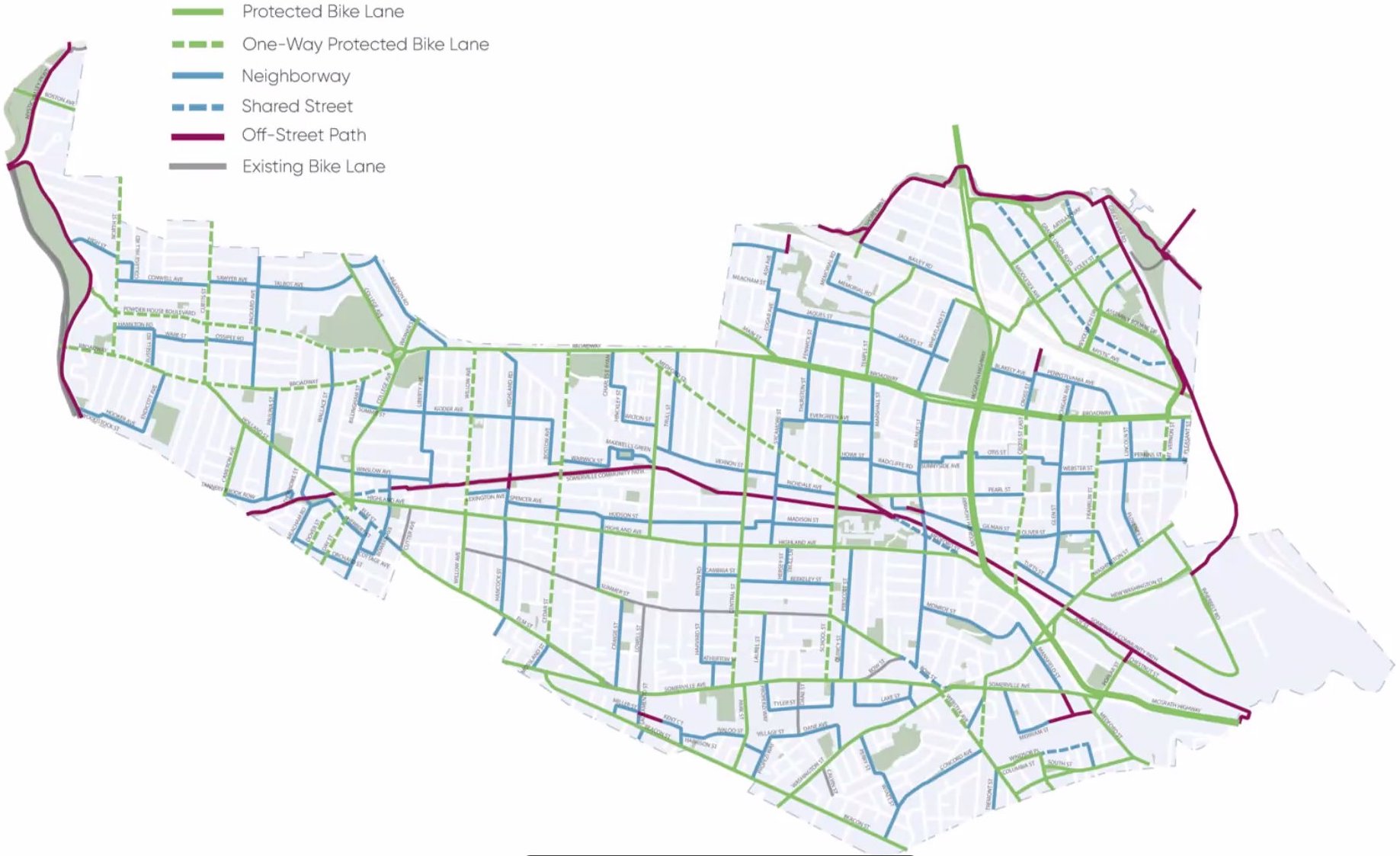 I want to stress that this is just a draft -- as I have a number of questions and concerns about this map myself. But it's an important milestone in our process of building a connected network of safe biking infrastructure in the city. As far as next steps, there will be pop-ups in the community over the next month: 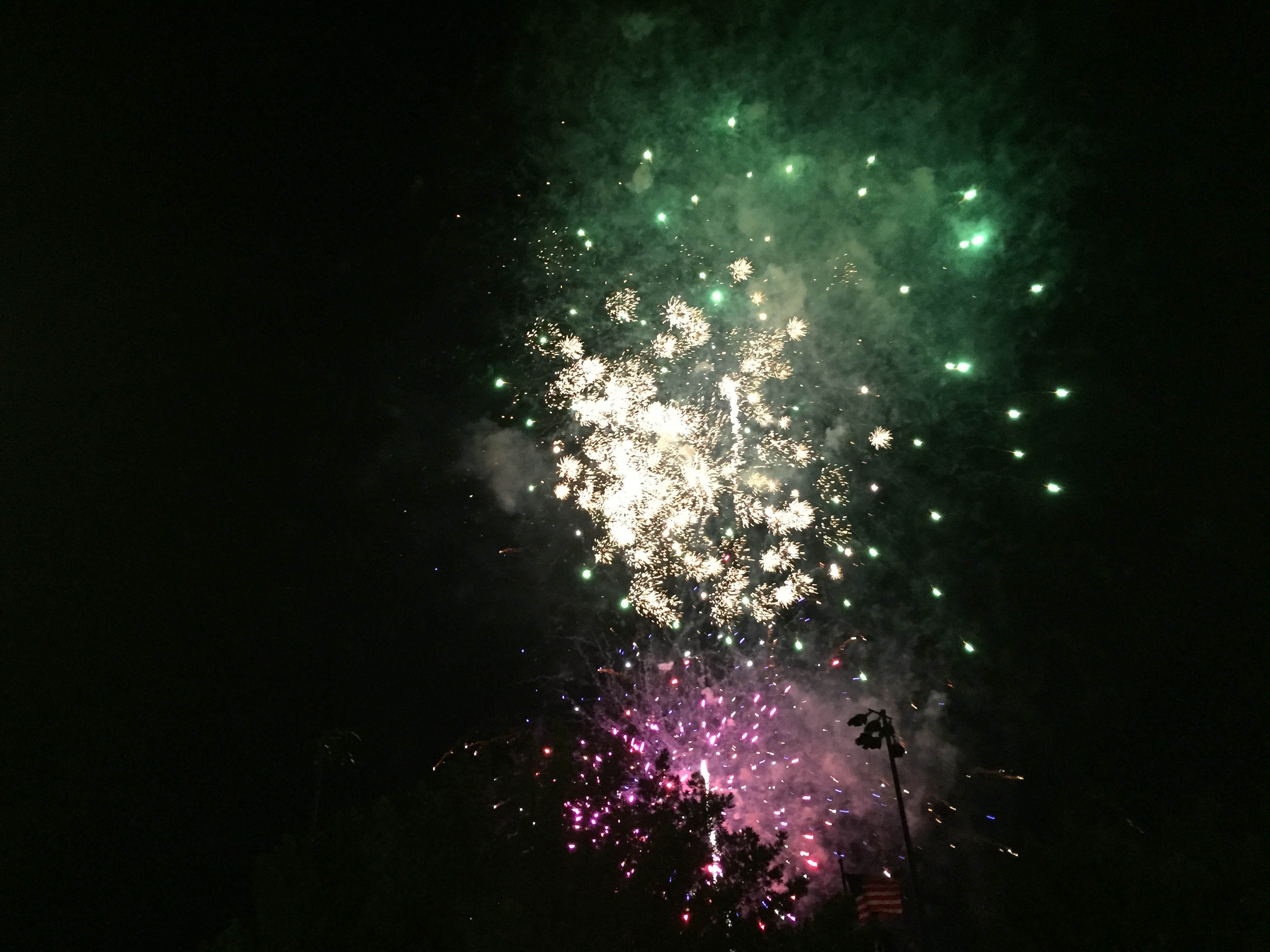 Avoiding private vehicle transportation to and from the event is encouraged if possible, due to road closures and parking restrictions in the area. Here's the full schedule for the evening:

Did You Know...
While a budget for the coming fiscal year is approved by the City Council prior to start of that new fiscal year, that doesn't mean the budget is completely finalized. Supplemental appropriations are possible -- and commonplace -- in the first few months of the new fiscal year. We'll be counting on a number of supplemental appropriations in the coming months to address City Council budget resolutions.

Office Hours
In addition to my regular weekly office hours on Sunday mornings, I offer on-demand office hours to fit your schedule or for those who prefer to meet individually. You can book time with me via my Calendly to meet in person or virtually, and I encourage you to do so -- especially now that I have more availability with Budget Season behind me.

The Week Ahead
With so much on the city calendar in the coming days, here's what I plan on attending this week: